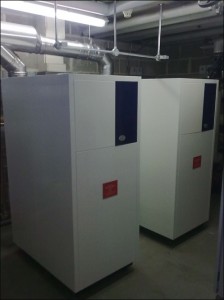 Industraheat were successful in being awarded the contract for the replacement of the three existing old boilers at Tomlin Court in Epsom, Surrey.

The old atmospheric fired units had become obsolete some years previously and spare parts were increasingly difficult to obtain.

Industraheat offered Rosebery Housing Association a design and proposal to install new modern Ultra High Efficient boilers and replacement controls to maximize fuel efficiency.  Two new MHG Procon HT 150 boilers were installed to provide a total heat output of 300kw.  A new flue system was installed to replace the old dilution system which was considered not to be suitable for the new condensing boilers.  The hydraulic modifications were always going to be a challenge due to lack of space but careful design meant this was completed to plan.  Once the new controls panel and BMS controls were installed the installation was completed within program and continues to operate reliably and efficiently.