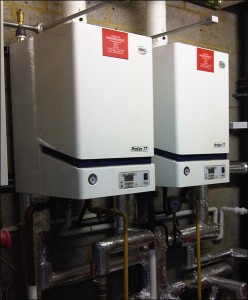 Unison had approached Industraheat after being recommended by one of our existing clients.

The aging plant had been giving some problems in the latter stages of its life and the antiquated controls were making it very difficult for the staff to maintain good comfort levels within the building.  After one of the boilers failed and they were informed parts were no longer available it was decided that replacement plant was urgently needed.

Industraheat offered a design and proposal to install new modern Ultra High Efficient boilers and controls.  With the addition of zoning controls for the three floors, which at the time had been independently let, it meant that further considerable savings could be gained over and above those for the new plant.

Two new MHG Procon 77 wall mounted boilers were installed to provide a total heat output of 150kw.  The existing flue dilution system was removed and new room sealed concentric flues installed for each boiler.  The hydraulic systems were modified to suit relatively easily and a new controls panel and BMS controller installed to take care of the new systems, including zoning controls for all three floors.  Significant savings have been made and comfort control within the building is now better managed.